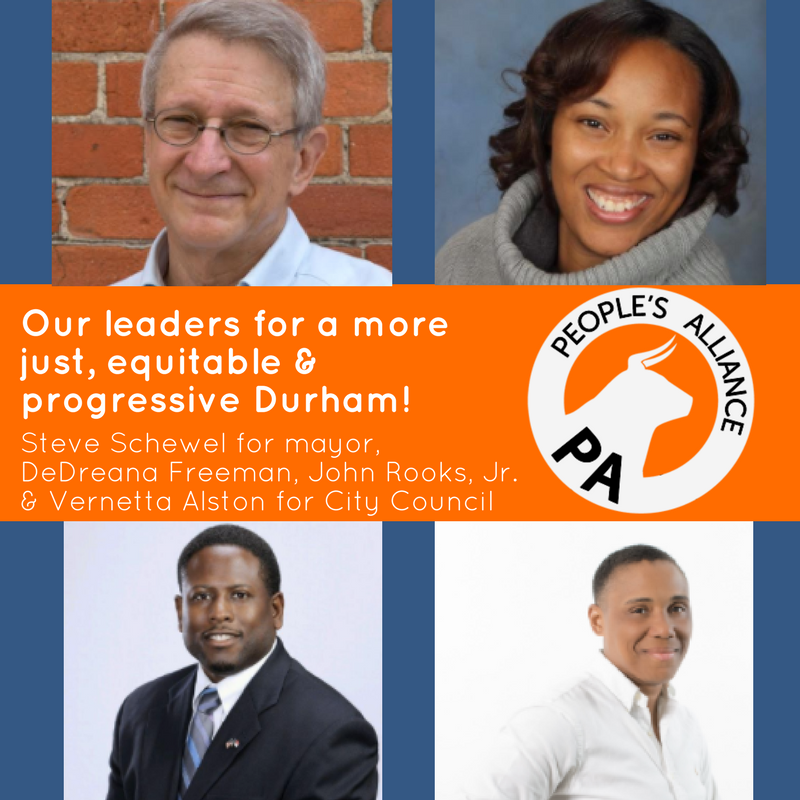 2017 Endorsements for Mayor and City Council

On August 29, nearly five hundred members of the People’s Alliance attended the People’s Alliance PAC’s meeting to determine which candidates would receive the PAC’s endorsement in the upcoming mayor and city council ward elections.  The record turnout was a reflection of PA’s swelling membership and the growing importance PA and its PAC play in the political life of the Durham community.  Members came to persuade and to be persuaded.  Few members came with their minds made up on every contest.  Each contest was marked by difficult choices between candidates with real progressive values.  The debate was robust.  It is PAC’s long tradition that everyone who wishes to speak gets a chance to speak and the meeting ran for several hours as members argued respectfully, back and forth.  PA PAC’s endorsement meetings are democracy at the grass roots level.  In the end, polling delivered solid majorities for these candidates:

Filing has now closed for the upcoming Durham City mayor and council ward seat elections.  With four of seven council votes in the balance, the future of Durham is at stake in this election.

After fifteen years as mayor, Bill Bell has announced his intention to retire.  Who will fill his shoes?  Seven candidates filed for office.  Among them, Farad Ali, Steve Schewel, and Pierce Freelon are well known, but Tracy Drinker, Shea Ramirez, and Sylvester Williams should not be discounted.  Mike Johnson also filed but since has informed PA PAC that he will drop from the race.  From the remaining six, who will PA PAC endorse?