Posts from the PAC 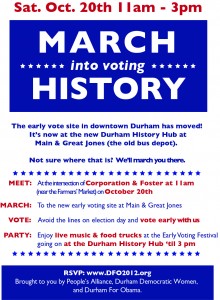 Early voting in downtown Durham has moved to the new Durham History Museum at Main & Great Jones. Avoid the long lines on election day … join us as we march to the new early voting site, cast our vote, and then stay to enjoy the live music and food trucks afterwards. This event is brought to you by People’s Alliance, Durham Democratic Women, and Durham For Obama.

See flyer here and sign up to march on MyBarackObama.com.

WHEN: Saturday, October 11, 2012, 11am-3pm
MEET: At corner of Corporation and Foster at 11am
VOTE: Cast your ballot early with us
PARTY: Early voting Festival at Durham History Museum til 3pm

Posted on Blog2 by People's Alliance Pac · October 03, 2012 7:17 AM
Poll work is a great opportunity to encourage and educate voters on about all of the choices on the ballot. Many voters this cycle will show up for the sole purpose of voting for President Obama. We need to make sure they know about ALL the critical choices and races on their ballot - from Walter Dalton and Linda Coleman to County Commissioners and the CRITICAL non-partisan judicial races on the back of the ballot. We want to make sure every voter steps into that booth prepared to vote in all contests. Many voters will appreciate our information on progressive candidates and want our materials for themselves, families, coworkers & friends.

Early Vote shifts are our top priority. The Obama for America campaign will be pushing all new registrants and less-regular voters to vote early.

Before you go, please read these rules about campaigning at election sites. Information such as this and other poll work instructions will be included with your materials.

HAVE MORE QUESTIONS? Watch this training video to see if this job is right for you! We need you!

Posted on Blog2 by People's Alliance Pac · September 28, 2012 7:12 AM
PA held our final 2012 endorsement meeting on Monday, Sept. 24th.  Our full list of our 2012 endorsements is now available, as well as important election and early vote information.

Posted on Blog2 by People's Alliance Pac · September 12, 2012 10:05 AM
All PA Members are encouraged to attend our follow-up endorsement meeting on at 7 p.m. on Monday, September 24th 2012, at St. Luke’s Church at the intersection of Hillandale Road and I-85.  Mark your calendars and plan to attend.

The candidates we have endorsed so far are really great.  But we still have work to do on that score.  We need to follow-up on the County Commission endorsements. We have to decide who to endorse in the District 13 Congressional race and who we will support for Soil and Water Supervisor. The agenda will be short, but the issues are so very important.  We brag that of Durham’s political organizations, only PA PAC lets its members do the endorsing.  Let’s have a big turnout and confirm our bragging rights.

Posted on Blog2 by People's Alliance Pac · June 22, 2012 1:30 PM
One of PA’s endorsed candidates, Marlowe Foster, is in a run-off election for the Democratic nomination for Commissioner of Labor. Second Primary elections have such low turn-out, that your vote counts even more. So please, don’t forget to vote at your polling place July 17th and take part in our democracy!

Please note, not all polling locations are open on July 17th. Please see the Durham County Board of Elections for a list of the 8 precincts that are combined for July 17th.

Though it is true that the state of North Carolina voted for bigotry and discrimination, we are thrilled that our love for Durham remains well founded – with a whopping 70% of our friends and neighbors voting AGAINST the amendment.  (continue reading)

Posted on Blog2 by People's Alliance Pac · April 25, 2012 7:09 AM
We need all hands on deck! Please help us fill the gaps in our PA poll work coverage. Many people coming to vote are very appreciative of our materials! Help educate voters on candidates and about the Amendment. YOU WILL MAKE A DIFFERENCE!

Email Lorisa to sign up for one (OR MORE!) shifts today!!

Posted on Blog2 by People's Alliance Pac · October 18, 2011 10:43 AM
Click Here to sign up for a shift passing out our endorsement cards at the polls for Early Vote. (Please note the three tabs on the bottom of the  spreadsheet with sign-ups for the three different polling locations).

Mayor Bill Bell has provided steady political leadership for the City of Durham, and has presided over a period of growth and economic revitalization. His approach is sensible and effective. Even in a period of economic downturn, Durham’s transformation while Bill has been mayor has been nothing short of remarkable. Few can match his record of public service. He should be re-elected for another term.

Diane Catotti is the anchor of the progressive viewpoint on Council. She will continue to work for affordable housing, thoughtful and balanced development, transit, and improvement of roads, parks, and other services. In her two terms on the council she has established herself as someone who does her homework and who is always ready for hard work. We are happy to endorse her re-election.

Steve Schewel is a committed, thoughtful, and practical progressive. He is an educator, a journalist, and a businessman. His Independent Weekly has long provided special insight into Durham affairs—always quick to cheer our successes and shine light on our difficulties. He is dedicated to community service and as an elected leader he will not shrink from tough decisions. As a member of the Durham School Board his patient and respectful style brought peace to a body paralyzed with infighting and got it working again. Count on Steve to work to improve neighborhoods at risk and to enhance programs and opportunities for Durham’s youth and those most in need. His run for council is a stroke of good fortune for the community.

Eugene Brown is an independent voice on Council and provides a significant viewpoint on issues of fiscal responsibility. He asks hard questions and makes sure important issues get aired. As the owner of a successful real estate business, he knows Durham and is a jealous guardian of the community’s welfare, special heritage, and reputation. Gene is an advocate for neighborhoods and growth when it makes sense. He deserves another term.

These three candidates will become part of a strong team that will help formulate progressive policies for Durham in these fiscally challenging times.

Durham Sales Tax Referenda
On November 8, 2011 Durham County voters will have the opportunity to say “yes” for increased transit service to Durham through increased bus and rail service, and to support our local schools and teachers.

In the current political and budgetary climate in Raleigh and Washington, conservative legislators are blocking progressive taxation of upper incomes. Our local governments can expect little help to prevent cuts in major areas, including education and transit. In response to this, the Durham County Commissioners have placed two sales tax proposals on the November ballot. One is a one-half cent addition to support a variety of enhancements to the transit system. The other is a one-quarter cent addition to support education. This local sales tax will, in effect, replace three-quarters of the one cent state sales tax that the state legislature did not renew.

The Durham People’s Alliance supports these sales tax referenda. The passage of the Transit referendum is a-once-in-a-generation opportunity to invest in our future, to ensure a modern transit infrastructure for the region. The action of the Durham electorate will spur our sister counties to adopt similar and compatible measures. The revenue generated by the other referendum will save jobs in Durham Public Schools, allow Durham Tech to give scholarships to DPS grads and will provide about $400,000 to pre-kindergarten programs, which have lost 20% of their funding from the state.
More information on transit.

Linward Hedgspeth is a lifelong resident of Rougemont and was an early supporter of incorporation.  His first concern is the provision of safe and reliable public water and sewer services for the community.  He would look to Durham County government for land use regulation while the new council builds public consensus for the establishment of local policies.  He opposes merger of municipal and county governments.

Lee Holden has for years been one of Rougemont’s head cheerleaders. He is the webmaster of the Rougemont community website and uses it to keep the community informed.  He strongly believes that incorporation is necessary to give Rougemont’s people a genuine say in the development and welfare of the town.  He loves Rougemont’s rural character and would like to see it enhanced with local shops and a farmer’s market and a public park.  He believes the water question is of prime importance and believes that it must be addressed even if incorporation fails.

Linda Huff has demonstrated ability in land use regulatory affairs.  She has served on Durham’s Planning Commission where she established a reputation for doing her homework, asking hard questions, and putting public good ahead of other considerations.  She sees protecting Rougemont’s rural heritage and the larger Durham community’s water resources as priorities.  Until Rougemont handles its own land use and zoning matters, Linda wants to see Rougemont representatives on Durham’s planning agencies.  We agree.

Edgar Johnson is a life-long resident of Rougemont. He is business owner in Rougemont and surrounding communities. Edgar has served as chair of the Board Trustees of the New Red Mountain Missionary Baptist Church for the last 31 years and served on the Board of Directors of the Little River Community Center for the last 17 years. He wants to assist in developing emergency plans for the Rougemont area and to secure a permanent solution to the community’s drinking water problem. He will listen to the citizens needs and be the voice for the people to the council.

PA-PAC would like to thank all of the PA members and progressive Durhamites who donated to PA-PAC and therefore made it possible to print and mail 15,000 of these attractive cards!