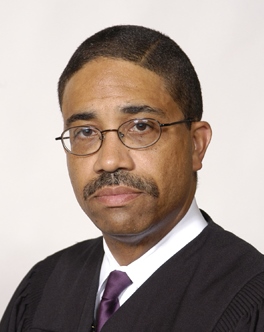 At the PAC’s endorsement meeting Thursday evening, May 12, members voted to endorse Judge Michael R. Morgan in his bid to be elected to the North Carolina Supreme Court. There are four candidates running for one seat.

The field will be narrowed to just two in June 7 primary elections and this is the only race on the ballot.  You can vote early at the Board of Elections 201 N Roxboro through Saturday June 4.

Michael Morgan is a highly respected trial court judge with more than twenty years on the bench. In that time he has handled the widest possible range of legal issues. No other candidate can match the depth and breadth of his experience. He has strong ties to Durham. He is a graduate of Duke University and North Carolina Central Law School. Although he is based in Raleigh, he frequently holds court in Durham. Attorney members of the PAC who have appeared before him praise his knowledge of the law, his judicial demeanor, his work ethic, his patience and impartiality, and his respect for litigants, attorneys, witnesses, and court staff.

PA PAC also noted that Morgan is a regular instructor at the National Judicial College –an organization created to train new judges and sharpen the skills of those who have experience on the bench. His desire to reduce the number of people in our jails and prisons through better funding of agencies and programs for the mentally ill, substance abusers, and other vulnerable persons aligns with People’s Alliance’s values. Judge Morgan also supports raising the age for youthful offenders – a position PAC members applaud.

Morgan is a registered Democrat.

This election is a battle for control of the judicial branch of North Carolina government. Currently, there are four conservative or conservative-leaning justices and three justices who could be considered progressive or progressive leaning. The seat at play this year is held by Justice Robert Edmunds, Jr. Edmunds is a conservative and that is no doubt why last year the republican-controlled legislature passed a law allowing him to request a “retention election” instead of a facing a challenger or challengers in a contested election. Under the retention election law, the voters would have been able to vote “yes” to retain Edmunds or “no” to throw him out. If the voters had voted “no,” then the law would have permitted republican Governor McCrory to appoint Edmunds’ replacement. When the law was passed, Justice Edmunds took advantage of its provisions by opting for a retention election.

Soon after the retention election law was signed by Governor McCrory, it was challenged in court by Raleigh lawyer Sabra Faires. In March, a three-judge panel sided with Faires ruling that the retention election law violated the North Carolina constitution. In response to the court’s decision, the General Assembly scrambled to add a primary election for Supreme Court candidates to the June 7 primary they were forced to add to the schedule when the federal court overturned North Carolina’s racially gerrymandered congressional districts. Faires is one of the candidates now running for Edmunds’ Supreme Court seat. Recently the N. C. Supreme Court, in a three-to-three vote, allowed the lower court decision to stand. As a candidate, Justice Edmunds was recused from participating.

PA PAC opposed the retention election law as an anti-democratic ploy by the republican-controlled general assembly to protect the conservative majority on our State’s highest court. At Thursday’s PAC meeting, speakers expressed their gratitude to candidate Sabra Faires for her courage and skill in challenging the law and their dismay that Justice Edmunds opted for the retention procedure instead of facing challengers.

For 40 years, the People’s Alliance Political Action Committee has been a vital part of the political life of Durham. PA-PAC takes the business of candidate endorsements very seriously. Candidates are asked to submit responses to questionnaires designed to test their political positions and their understanding of important issues. At the PAC’s endorsement meetings, every member stands on an equal footing in the debate and everyone who wishes to be heard is given the opportunity to speak. Endorsements are decided not by a small committee, but by a vote of the whole membership.

If you are not yet a member of People's Alliance or would like to contribute to PA PAC, click here to join or make a donation.